Home » How To » Ultimate Ears Adds Siri to UE Boom 2, Lets You Sync Over 50 Speakers at Once – mytutorials.xyz
Advertisement

Ultimate Ears Adds Siri to UE Boom 2, Lets You Sync Over 50 Speakers at Once – mytutorials.xyz

Ultimate Ears today updated its iOS and Android apps with a feature called “Party Up” that lets users connect “more than 50” of its Bluetooth speakers at once (via TechCrunch). When synced together, every speaker can be simultaneously controlled from a single mobile device, with the music selection and volume synced together across every speaker. Additionally, the company’s UE Boom 2 speaker is gaining Siri integration with today’s update, making it “quicker, easier, and more convenient than ever to keep your party going.” 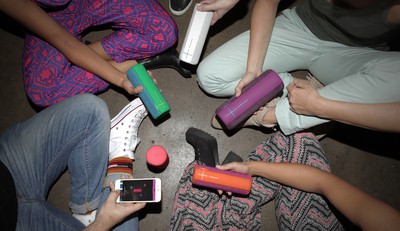 After updating the app, users can find the new setting by swiping right-to-left on the home screen. In this new Party Up section of the app, guest speakers will appear at the bottom of the screen, called the drawer, and all users have to do is drag and drop each speaker they want to sync up into the middle of the screen. Similarly, to remove a speaker from the party, drag and drop it back into the drawer.

PartyUp is an exclusive UE App feature that lets you wirelessly connect 50+ speakers and take your music where no other portable bluetooth speaker can go. Caves. Mountains. Lakes. Rooftops. You name it. So grab your speaker and your friend’s speakers, and take the party to a new level. Wherever. Whenever

With our brand new and improved UE App, growing the party has never been so easy and fun. Simply download the UE App to join and amplify your Party. So no matter how big your party gets, you can connect 50+ UE BOOM, UE BOOM 2 and UE MEGABOOM wireless speakers at the same time. #PartyUp

Ultimate Ears says the UE Boom, UE Boom 2, and UE Megaboom can all participate in the new Party Up feature, but the company’s smaller Bluetooth speakers – the UE Roll and UE Roll 2 – are not supported. In its tests, Ultimate Ears engineers have said to reach up to 140 connected UE speakers, although it’s not likely the company’s “50+” statistic is accounting for users to have that many speakers in one place simultaneously.

UE Boom and Megaboom users can try out the new Party Up mode today by downloading the update to the UE Boom iOS app on the App Store for free. [Direct Link]