Uber has announced that users will today begin seeing a new update rolling out for the popular ride-hailing app, which transforms it into a themed Rogue One: A Star Wars Story experience. The visual update comes via a partnership with Disney, and replaces the usual Uber vehicle icons with a few easily recognizable starships from the Star Wars universe, including X-Wings.

In addition to the visual update, users will also be able to watch “exclusive video content” from the film during their Uber rides if they choose to turn on the Star Wars theme. Uber said that riders in “hundreds of cities globally” will gain access to the update, although it didn’t specify which cities might be missing out on the new Star Wars experience. 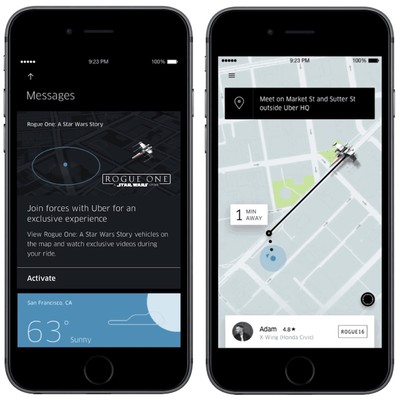 Last week, Uber faced blowback surrounding its newest version update, which introduced a way for the app to continue tracking each user’s GPS location five minutes after their Uber ride is complete, no matter if the app is open or not. Uber said the move was to improve the overall performance and safety of the app, but many of its users responded negatively online.