Twitter is opening up a new “Explore” tab on iOS and Android to a select group of users of its service. The new section is aimed at “content discovery” and showcases trending topics and simplified search tools in addition to “Moments,” which the tab was previously dedicated to (via Mashable).

Moments launched a year ago this month with the purpose of showing users stories and conversations unfolding on the service in differing categories. The tab had sections like “Entertainment” and “Sports,” with individual Moments changing throughout the day as big events occurred. 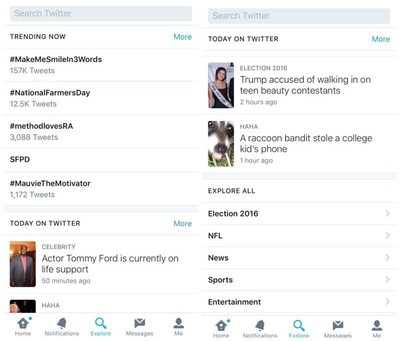 Image via Mashable
Explore aims to expand Moment’s singular purpose with more useful data for users, as well as keeping the basic structure of Moments packaged into the tab. For those who have seen the Explore section show up on mobile, it appears various sections are highlighted at first, including “Trending Now,” “Today on Twitter,” and “Explore All.”

“As part of our continued efforts to make it easier to find what’s happening on Twitter, we’re testing a new tab for content discovery,” the company said in a statement.

With Moments recently expanding into a customizable user feature, the company’s future goals for Explore remain uncertain. It didn’t comment on whether or not Explore would become a permanent feature for all users on iOS and Android, either.

The company has gone through a hard time over the past few months, facing its slowest revenue growth in years amid talk of rocky waters at the social network’s headquarters because of uncertainty surrounding a potential buyout by other companies.

Over the summer, Twitter CEO Jack Dorsey admitted that the service can be confusing for newcomers and even alienating to its install base of loyal users. In attempts to keep its users happy, Twitter has recently removed media attachments from the 140 character limit, and is trying to address harassment on the service with a new tweet moderation filter system.