Twitter’s first-party iOS app recently began rolling out support for rich notifications for anyone on iOS 10, letting users get a larger glimpse at their incoming notifications without having to open their iPhone or the Twitter app. The new notifications include a few formatting retouches, as well as the inclusion of images in relevant posts.

With the new notification set-up, users will get pop-ups for the usual Twitter activities, including @ mentions and direct messages, but now a small thumbnail appears alongside the text of the Tweet on the iPhone lock screen and in Notification Center. Whenever users force touch the notification, they’ll get an expanded view of the content with a larger image, along with the normal options to like and retweet. 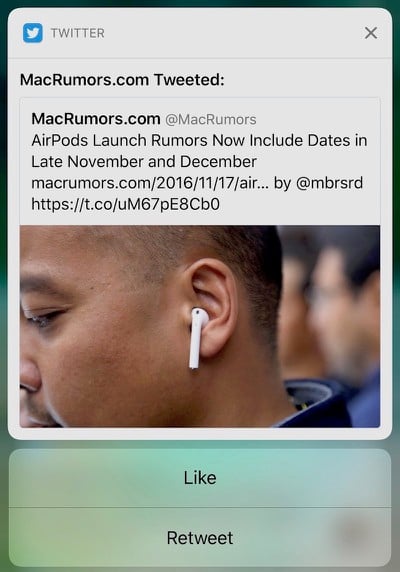 Rich notifications were one of the flagship features when iOS 10 launched in September, and have been included in many of Apple’s first-party apps like Messages and Mail. Other companies have slowly been adding support for the feature, including apps like Netatmo Security, which let users watch clips of a connected security camera directly within the notification.
Tag: Twitter
10 comments