Twelve South today introduced a new product in its HiRise line, called the HiRise Duet, which provides charging stations for an iPhone or iPad, as well as an Apple Watch. The stand supports the Apple Watch’s Night Stand Mode, which displays an alarm clock and turns the device’s Digital Crown into a snooze button. 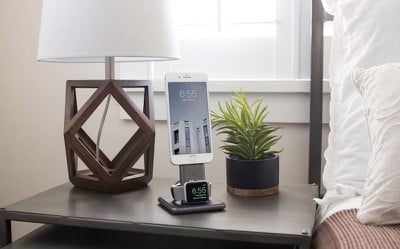 The stand has a 3.75” square footprint and includes an integrated Lightning charger for iPhone and iPad, as well as a Magnetic Charging Disc for the Apple Watch, all of which are powered by a single AC cable. The bottom of the stand is lined with a layer of leather to protect the Apple Watch from scuffs. 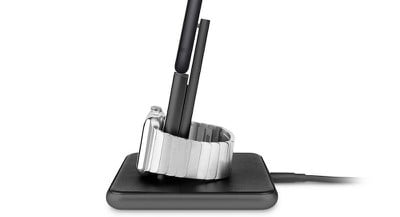 Unlike plastic stands that get dragged across the nightstand from the weight of the power cord, the all metal HiRise Duet stays put. This mighty one pound, dual charging stand weighs as much as three iPhone 7’s. So when you reach for your iPhone in the middle of the night, or go for the snooze button in the morning, both devices will be right where you put them – atop HiRise Duet. You’ll also notice the curves on HiRise Duet mirror the beautiful design of iPhone and Watch.

The HiRise Duet is available from Twelve South for $119.99. The stand supports the iPad mini, 9.7-inch iPad Pro, and any recent Lightning-enabled iPhone generation.