Home » How To » Tiny Wings Launches on Apple TV for $2.99 – mytutorials.xyz
Advertisement

Popular iOS game Tiny Wings has launched today on the fourth-generation Apple TV for $2.99. The launch was teased by the game’s creator on YouTube earlier in the week, with a video that showcased the game, now called “Tiny Wings TV,” and its split-screen multiplayer abilities. 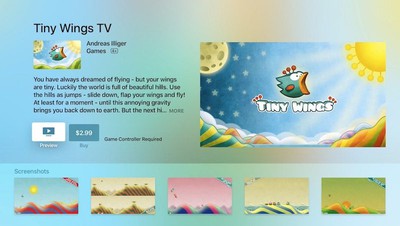 Two players can play the game together on one Siri Remote, or with a combination of a Siri Remote and an Apple TV-supported MFi controller. Players can even connect to the iOS Tiny Wings app [Direct Link] and use their iPhone or iPad as a controller.

Otherwise, Tiny Wings TV keeps the same one-button control gameplay that requires players to guide a bird through levels by timing and aligning where the bird falls in the game’s procedurally generated hillsides, which will look different every day it’s played. iCloud support will also sync and save gameplay between the Apple TV and iOS versions of Tiny Wings.