Included in the update is the “Learn to Code 3” module, which features a fresh guided learning experience designed to walk children and adults through basic coding with Apple’s Swift programming language. Learn to Code 3 features lessons based around Blu, a fun character that’s aimed at making it easy to learn to code. 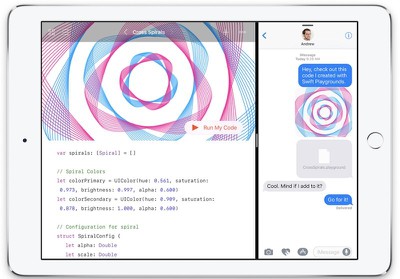 Apple today announced plans to host several free one-hour Hour of Code workshops between December 5 and December 11 at retail stores across the world. Registration for Hour of Code is now open.

Also new in Swift Playgrounds are music and sound effects, notifications for new content, and a feature that highlights each line of code as it is run.

What’s New in Version 1.1
– Learn to Code 3 continues the guided learning experience as you help Blu explore the universe
– Hour of Code challenge gives a Byte-sized introduction to the Learn to Code lessons
– Step through your code to highlight each line as it is run
– Learn to Code now includes music and sound effects
– Notifications for new and updated content

Note: Download new copies of Learn to Code from the Featured page to get the music, sound effects, and line highlighting features.

Swift Playgrounds, which is available for all the iPad Air and later, iPad mini 2 and later, and all iPad Pro models, can be downloaded from the App Store for free. [Direct Link]