Home » How To » Star Ratings Make a Return to Apple Music on iOS 10.2 Beta – mytutorials.xyz
Advertisement

In iOS 10, Apple Music lost the star rating system that allowed users to personally rate a song on a scale of 1-5, which was then saved in their library so they could remember and later sort tracks via the ranking system. Following the release of the iOS 10.2 beta yesterday, iTunes expert Kirk McElhearn discovered that star ratings have returned to the Apple Music app on iOS, now appearing as a toggle option in Settings > Music. 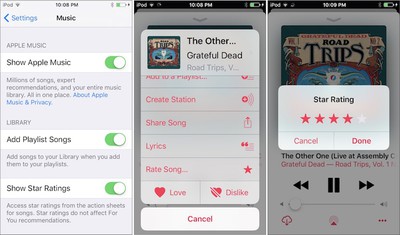 After turning on “Show Star Ratings,” users will be able to once more give each track a personal rating, through a few added steps, however. The process required to get to the “Rate Song” menu is as follows: tap the ellipsis menu at the bottom right of the screen when a song is playing to bring up its action sheet, scroll down to “Rate Song,” choose the star rating, then tap “Done.” In prior versions of iOS, users simply tapped on the artwork of a song to bring up the star rating menu.

As the Settings submenu clarifies, “Star Ratings do not affect For You recommendations,” so Apple Music’s binary like/dislike system is still the only resource for subscribers to teach the streaming service which songs they enjoy, and which they don’t. Besides Star Ratings, it was also discovered that within the beta of iOS 10.2, there’s a new option to sort playlists by type, title, and recently added, as well as new options for sorting songs and albums by title or artist.