Sony has released a new PlayStation Communities iOS app that allows players to interact with fellow PS4 gamers from their Apple phones and tablets.

The app works much like a forum portal: Players using the app can search for, join, and interact with groups, where they can post messages and images on a community wall. Members can stick to chatting about gaming or join groups to set up multiplayer games. 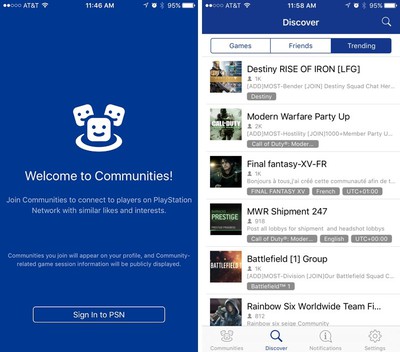 PlayStation Communities are places where you can find players who have similar interests and preferences.
Within a Community, you can join parties and launch into games with other Community members, or talk about your shared interests. For instance, if you’re having trouble finding players to tackle Destiny’s newest raid, Wrath of the Machine, a Destiny community may help you fill out your fireteam.

PlayStation Communities is a free download for iPhone and iPad available on the App Store.