Snapchat is joining in on the augmented reality craze today with an update to its iOS app that lets Snapchatters use both their outward-facing and self-facing cameras to discover objects hidden in the world around them through their iPhone screens. Called “World Lenses,” the options include an Election Day filter, rainbow-vomiting clouds, floating glitter, snow, hearts, and a horror-themed lens that turns your environment dark or light with the use of a flashlight (via The Verge).

Also discovered hidden within the update is a menu option to sync with Snapchat’s upcoming Spectacles, sunglasses that will let users record 10 seconds of video at a time. As found by Mashable, the menu reads, “Spectacles are sunglasses that Snap! Learn more about Spectacles here,” before directing users to Spectacles.com. There’s still no confirmation of when the $130 device will launch. 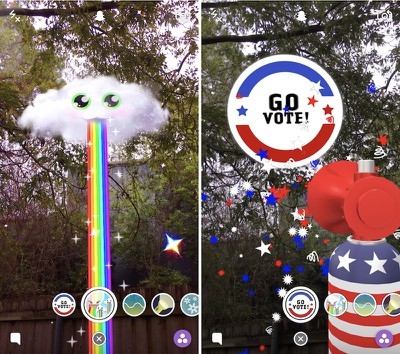 The update also includes two new UI interactions for users, letting them press and hold on any snap to forward it to a friend so they can check it out. To cancel the process, simply press on the left side of the screen to return to the snap’s normal playback loop.

Apple CEO Tim Cook has been championing AR in recent months, calling the technology “profound” in its potential to encourage and better stimulate human contact, not replace it. Apple is said to be investing a lot in AR as it moves forward, and the most recent rumors peg the company’s potential efforts in the field as a focus on an assisted driving system that would have some kind of augmented reality user interface.

For now, more entertainment-based apps like Pokémon Go and Snapchat are the best examples of the technology. Users who don’t have it yet can download Snapchat for free on the iOS App Store. [Direct Link]