Popular music-detecting app Shazam today rolled out an update that adds support for the service within Messages, so users can send new artist and song discoveries directly to friends and family members.

To use Shazam in Messages, make sure the app is updated to version 10.1.0, then open Messages, navigate to the contact you want to send a song to, and tap the App icon to the left of the conversation box. Shazam will now be in your App Drawer, so either tap the four dots on the bottom left corner of the screen, or swipe through each app until you reach it. 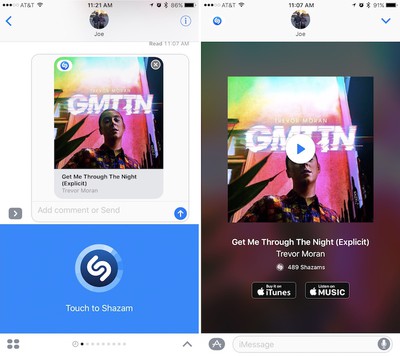 The only user interface option within the Messages app for Shazam is “Touch to Shazam,” so whenever a song is playing nearby, allow the app to listen and once it does it’ll create a card to send to the current contact. The created message can be tapped on to jump into Shazam, buy the track on iTunes, or listen to it on Apple Music.

With its new update Shazam is joining a collection of existing apps that introduced support for the Messages App Store following the launch of iOS 10. In a recent Sensor Tower study, download growth for these apps was said to have increased profoundly after rolling out support for truncated, but helpful versions of each app in Messages.

Shazam can be downloaded for free from the iOS App Store [Direct Link]. Those who already have the app should start seeing the update rolling out throughout the day.