Samsung has issued a full-page ad in three major U.S. newspapers and published an open letter on its website apologizing to its customers for the Galaxy Note 7 debacle (via The Verge).

The print letter was signed by Gregory Lee, president and CEO of Samsung Electronics North America, and appeared in Monday editions of The Wall Street Journal, The New York Times, and The Washington Post. 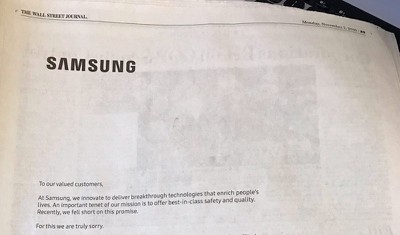 “An important tenet of our mission is to offer best-in-class safety and quality. Recently, we fell short on this promise. For this we are truly sorry. We will re-examine every aspect of the device, including all hardware, software, manufacturing and the overall battery structure. We will move as quickly as possible, but will take the time needed to get the right answers.”

The online letter was signed by Y H Eom, president and CEO of Samsung Electronics Europe, and apologized similarly to “a small number of affected customers” on the continent, where the Note 7 had yet to go on general sale.

Samsung still doesn’t know exactly what caused some Note 7 handsets to spontaneously combust, but says it will continue to investigate the device’s design and manufacturing process to determine what went wrong.

Released in August ahead of Apple’s latest iPhone, the Note 7 quickly found itself at the center of a quality control crisis after reports emerged of phones setting on fire, causing injury and property damage.

Samsung permanently discontinued the phone after replacement units started exploding as well. Samsung says about 85 percent of all devices have now been returned. Analysts believe the recall will cost the company $5.4 billion in profit through the first quarter of 2017.

Samsung’s letter of apology also covers reported issues with various models of top-load washing machines, which have also been subject to a company recall. According to Bloomberg, 2.8 million machines in the U.S. were recalled by Samsung last week after it was found that the top could become detached from the chassis during use.

The U.S. Consumer Product Safety Commission said there had been nine related reports of injuries and that Samsung had received more than 700 reports of faulty machines since the problem came to light.