Reddit today updated its official iOS app to version 2.0, fixing a few bugs for Reddit Live as well as introducing full support for the iPad. The first-party app, which launched in April of this year, has been available only for the iPhone and iPod touch until today. 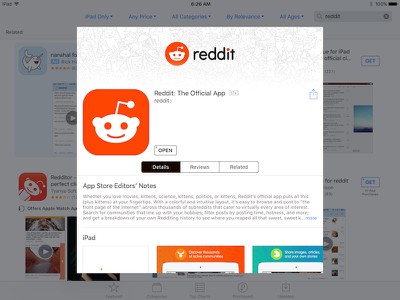 On the iPad, Reddit keeps essentially all of the same features and tabs that users can expect: timeline, subscriptions, inbox, and profile. Each area of the app allows users to browse their subreddits, search for new ones, comment on posts, reply to messages, and more.

Many users have stuck to popular third-party Reddit apps like Narwhal, iAlien, Baconreader, Eggplant, Antenna, and Alien Blue in place of Reddit’s official app. Alien Blue, which was acquired by Reddit in 2014, has since been deleted from the App Store so as to not conflict with the company’s new first-party app.

Reddit: The Official App can be downloaded from the App Store for free. [Direct Link]