Philips today updated its Hue app, used to control its line of Philips Hue lights, to version 2.6.0. The update adds long-awaited support for the iPad, allowing iPad users to access their lights from an iPad-optimized app for the first time.

The iPad version of the Philips Hue app features the same general design and controls that were introduced when Philips revamped the Hue app back in April. 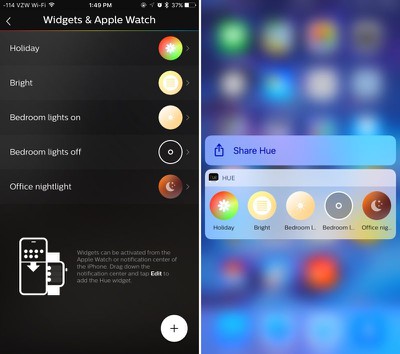 For iPhone users with a 3D Touch-enabled device, the new version of the app also adds improved iOS 10 support and new 3D Touch options. When you press on the Hue app icon, you’ll now get access to the Widget options you’ve established in the app.

Scene editing has been improved, making it possible to edit custom scenes with and without a picture, and the update includes bug fixes and stability improvements.

What’s New
– Added iPad support
– Improved iOS 10 support, you can now 3D Touch the app icon to quickly access your widgets
– Improved scene edit, now you can also edit your custom scenes both with and without a picture
– Bug fixes and stability improvements

The Philips Hue app can be downloaded from the App Store for free. [Direct Link]