Apple this evening updated its executive profiles page to remove Paul Deneve, suggesting he may no longer be with the company or has left the executive team. Hired in 2013, Paul Deneve served as Apple’s vice president of special projects, reporting to Apple CEO Tim Cook.

Paul Deneve came to Apple from luxury fashion house Yves Saint Laurent, where he served as CEO. Deneve, who joined Apple as it was working on the Apple Watch, also worked at several other luxury fashion labels like Courreges, Nina Ricci, and Lanvin. 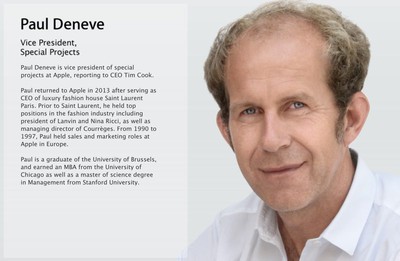 Paul Deneve’s executive profile, which has now been removed from Apple’s website.
During his time at Apple, Deneve has had a hand in marketing the Apple Watch. He was involved in projects like the massive floral window installation at Selfridges, and worked alongside Apple’s head of retail Angela Ahrendts getting the Apple Watch in high-end boutiques around the world.

Deneve’s LinkedIn page continues to list him as a vice president at Apple.

Update: According to Apple, Paul Deneve is still at the company, but is now reporting to Jeff Williams instead of Tim Cook.