Many nonprofits like UNICEF, charity:water, American Red Cross, (RED), Save the Children, World Wildlife Fund, and more will begin accepting Apple Pay payments starting this morning, while others will adopt Apple Pay support “over the coming months.” A total of 19 charities are supporting Apple Pay as of today.

Charities will be able to accept Apple Pay on their websites using Apple Pay for the web, and donations can also be made through specific charity apps that support Apple Pay. 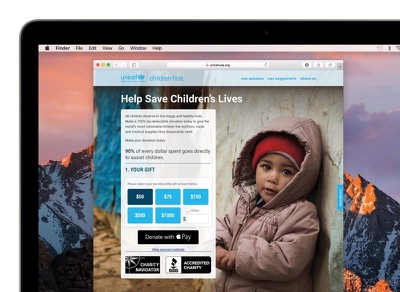 “We’re making it incredibly easy to give back with Apple Pay,” said Jennifer Bailey, Apple’s vice president of Apple Pay. “Websites and apps tell us they see twice as many people actually completing a purchase with Apple Pay than with other payment methods. We think offering such a simple and secure way to support the incredible work nonprofits do will have a significant impact on the communities they serve.”

Many charities are hoping the ability to accept payments over Apple Pay will drive Apple customers to make more donations this holiday season because it makes the donation process both simpler and more secure.

“Apple Pay removes obstacles like forms or concerns about security, allowing donors instead to focus on the impact their gift will make on communities waiting for water.” — Peter Chasse, President & Founder, The Water Project.

As TechCrunch points out, nonprofit organizations could not previously accept Apple Pay because Apple’s rules prevented iOS apps from collecting funds for charities or fundraisers using Apple Pay. Charities previously had to collect funds outside of their apps, but will now be able to include built-in donate buttons.