The new entry-level 13-inch MacBook Pro without a Touch Bar has only been available for a day and just made its way into Apple retail stores, but OWC has already managed to take apart one of the machines to get a glimpse inside. 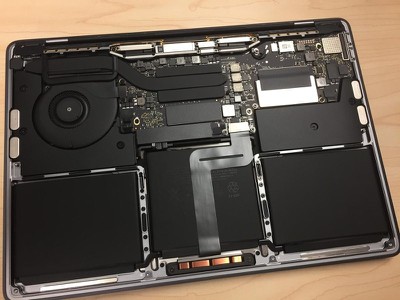 OWC has noted a number of other observations about the new MacBook Pro:

– Solid State Drive module is removable
– Bottom was more difficult to remove than previous generations, but it was not glued
– Speaker module needs to be removed to pull SSD back
– SSD had very strong tape covering the interface port
– Laptop automatically turns on when you open it regardless of pressing power button

OWC’s discoveries only apply to the 13-inch MacBook Pro without a Touch Bar. It’s likely models with a Touch Bar have a similar build, but the internal hardware is different because it incorporates a new component. We’ll need to wait a few more weeks to see what’s inside the higher-end 13 and 15-inch MacBook Pro machines, as they won’t be available until mid-November.