Home » How To » Netflix Becomes Top Grossing iOS App in the U.S. for the First Time – mytutorials.xyz
Advertisement

Netflix yesterday briefly became the number one top-grossing iOS app in the U.S. for the first time, holding at bay the likes of Spotify and Candy Crush Saga for most of Monday.

The app also occupied the coveted top spot on iPhone in India, Mexico, and Colombia yesterday, as noted by app tracking company SensorTower, which offered a timeline leading up to the achievement in a blog post. 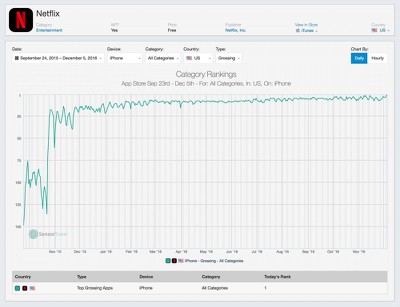 Image via SensorTower.
The accomplishment comes approximately one year after Netflix introduced the ability for users to pay the monthly subscription fee as an in-app purchase. Over that time, its weekly net revenue has grown from less than $50,000 to nearly $2.9 million. In November, it was the No. 7 grossing iOS app overall in the U.S.

Apple takes a 30 percent cut of all in-app fees, but last month announced it was lowering the amount to 15 percent for subscription-based streaming video apps like Netflix and Hulu. Apple will soon extend the 15 percent rate to all subscription video services that are integrated with the company’s upcoming TV app.