Home » How To » Neil Young’s Catalog Returns to Apple Music After He Said Streaming Has ‘Worst Quality in History’ – mytutorials.xyz
Advertisement

Rock and Roll Hall of Fame singer Neil Young’s full back catalog has returned to Apple Music, Spotify, Deezer, and elsewhere, less than two years after he pulled his collection from all streaming services due to his belief that streaming delivers the “worst quality in history,” according to Music Ally. 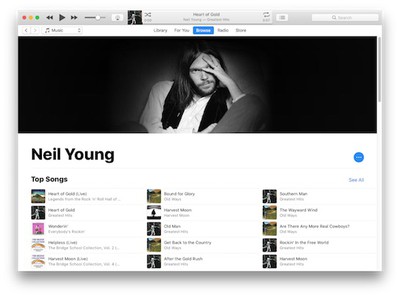 Young stopped streaming his songs in July 2015, and at the time said “it’s not because of the money” but rather “about sound quality” in a Facebook post.

Streaming has ended for me. I hope this is ok for my fans.

It’s not because of the money, although my share (like all the other artists) was dramatically reduced by bad deals made without my consent.

It’s about sound quality. I don’t need my music to be devalued by the worst quality in the history of broadcasting or any other form of distribution. I don’t feel right allowing this to be sold to my fans. It’s bad for my music.

For me, it’s about making and distributing music people can really hear and feel. I stand for that.

When the quality is back, I’ll give it another look. Never say never.

Young’s catalog first returned to streaming service Tidal’s high-fidelity CD quality tier in April, although his songs were also made available through its standard tier with a max quality of 320 kbps. Apple Music has a max quality of 256kbps. Both services use the Advanced Audio Coding (AAC) encoding format.

Young himself launched Pono, a music download service with high-resolution audio, in early 2015. The digital music service delivers high-resolution 24-bit 192 kHz audio. However, the store has been temporarily offline since July after its primary cloud-based infrastructure partner Omnifone was acquired.

Young has yet to provide a reason behind his decision to bring his catalog back to additional streaming services.