A new app called myLINGO lets Spanish-speaking users listen to studio-recorded dubs of the most popular movies while they’re in theaters, thanks to backing from studios including Disney, Paramount, and Sony. The app has also obtained “strategic partnerships” with Regal Entertainment Group and Cinemark Theaters within the United States.

myLINGO works by letting users search for the movie they’ll be watching, and then downloading the Spanish audio track to their iPhone, which is recommended to be done at home on Wi-Fi. After that, the app does all the work by listening for the film’s audio through the iPhone’s microphone, and delivering the Spanish version through the user’s headphones “in perfect sync with the film.” 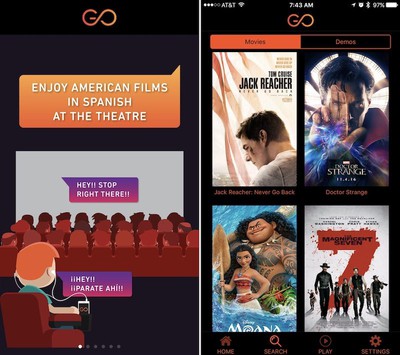 The company noted that the app’s tracks are “studio-sanctioned Spanish versions” of each film available on the app, which were originally created and distributed for international release. The audio translations only play if the app can hear the movie on screen, includes a dark mode that prevents distractions in the theater, and once the movie is over the audio file self-deletes from the iPhone. Right now, myLINGO is only available for Apple’s iPhone.

“Hispanic audiences spent approximately $2.5 billion at the box office in 2015, proving a big incentive for cinemas to cater to this market segment,” said Olenka Polak, co-founder and CEO of myLINGO. “Even so, our research shows that nearly half of all Spanish-dominant Americans avoid going to the movies because films aren’t shown in Spanish. myLINGO addresses that challenge as a partner to both studios and exhibitors, with an innovative way to drive new customers and revenue,” she added.

The app’s business model sets prices on a movie-by-movie basis. Users will have to pay $1.99 for each audio track they wish to listen to at the theater, although a few movies currently in the app — including Disney’s Moana and Marvel’s Doctor Strange — are free “for a limited time.” myLINGO also doesn’t support Bluetooth or any wireless headphones and recommends users remember to bring their wired headphones with them to the movies.

The limit on the app’s use in its current state is placed on the studios supporting it, but there are still popular films out now and coming soon that users will be able to try with myLINGO, including: Moana, Office Christmas Party, Rogue One: A Star Wars Story and Passengers. Other languages are coming down the line, but myLINGO CEO Olenka Polak told Variety that the focus is only on Spanish at this time because “we want a clear marketing message.”

You can download myLINGO on the iOS App Store for free. [Direct Link]