Home » How To » Minecraft is Coming to Apple TV by the End of the Year – mytutorials.xyz
Advertisement

Minecraft is Coming to Apple TV by the End of the Year – mytutorials.xyz

During its “Hello Again” event today Apple revealed that the popular crafting video game Minecraft is heading to the fourth-generation Apple TV sometime by the end of 2016. 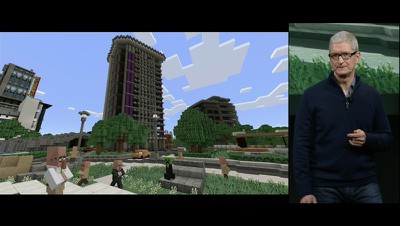 During the presentation, Apple CEO Tim Cook said that users will even be able to play with friends who are on an iPhone or iPad. “You can build new worlds on your Apple TV, and play with your friends using iPhones and iPads.”
Related Roundups: Apple TV, tvOS 14
Tag: October 2016 event
Buyer’s Guide: Apple TV (Don’t Buy)
20 comments