Home » How To » Microsoft Offering MacBook Owners Up to $650 Trade-In Credit Toward Surface Pro or Surface Book – mytutorials.xyz
Advertisement

Shortly after Apple’s October 2016 event, where the company debuted the new 2016 MacBook Pro with Touch Bar, Microsoft launched a new promotion aiming to convert unsatisfied MacBook owners to either the Surface Book or Surface Pro 4. 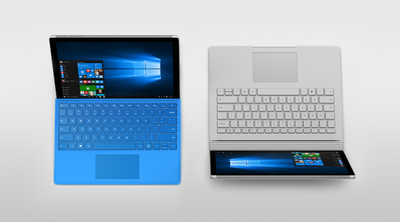 Today, we are announcing a limited-time “trade up” offer to invite more people to experience Surface. If you have a Mac but want to experience the ultimate laptop with on-screen touch, Surface and Microsoft Store are here for you. Starting today, anyone in the U.S. can trade in their MacBook Pro or MacBook Air at a Microsoft Store or online for up to $650 off a Surface Book or Surface Pro.

To be eligible for credit, the MacBook in question must not have a screen with any cracks or dead pixels. The housing must be intact and free of etchings, asset tags, or cracks. The computer must be able to power on and boot all the way to the desktop and all keyboard keys and functions must properly work. Additionally, Microsoft requires that users trade in the computer’s charger.

The trade-in offer is good at Microsoft Stores in the U.S. and on Microsoft’s website until November 10, 2016. The Surface Pro 4 tablet starts at $899 while the Surface Book starts at $1,499.