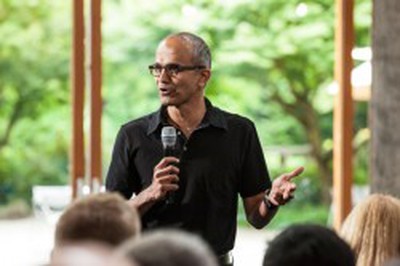 Microsoft CEO Satya Nadella has stoked speculation this week that Redmond is prepping a new line of smartphones under the Surface brand for launch in early 2017.

In an interview with the Australian Financial Review published on Monday, Nadella said the company was conducting innovative research that would ensure it continued to have a presence in the smartphone market. However, rather than follow a present trend, Microsoft would attempt to re-define the field in a single-handed pursuit of the “ultimate mobile device”.

Underlining his philosophy, Nadella said that the company would not launch into a device category without bringing something different to the table, because it was more interested in how individuals and organizations were using devices, and less in the devices themselves.

“We don’t want to be driven by just envy of what others have, the question is, what can we bring? That’s where I look at any device form factor or any technology, even AI,” he said. “We will continue to be in the phone market not as defined by today’s market leaders, but by what it is that we can uniquely do in what is the most ultimate mobile device.”

Rumors of a “Surface Phone” that would complement the popular Surface Book and the highly praised Surface Studio have been bubbling away for a while. Some rumors suggest a device running Windows 10 Mobile OS, others predict a range of devices, some of which could sport a keyboard flip case reminiscent of Blackberry phones. Meanwhile, several observers have pointed to the HP Elite x3 – part smartphone, part mini PC – as a potential indicator of where the company could take its mobile ambitions, possibly as soon as early next year.

The introduction of a Surface Phone would represent a bold return to the smartphone market for Microsoft, after its consumer phone ambitions fell flat following the company’s Nokia mobile acquisition over two years ago. Microsoft subsequently laid off hundreds of employees tied to its smartphone business in May, suggesting the company had all but given up on the consumer phone market.