Microsoft today launched the “Microsoft Solitaire Collection” on iOS and Android, a package of classic Solitaire games that include Klondike, Spider, FreeCell, Pyramid, and Tripeaks. As noted by The Verge, Microsoft’s version of Solitaire has been available on Windows for more than 25 years, but this marks the first time that the game has been extended to other platforms. 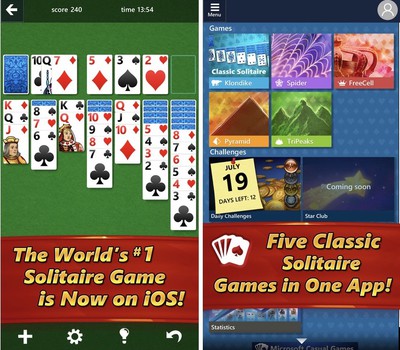 The app will offer daily challenges for players, with four varying levels of difficulty, and Xbox Live integration will let anyone with a subscription to Microsoft’s console service sign into their account, compete with friends, and earn achievements. Cloud saves will allow for multi-device use as well.

Microsoft Solitaire Collection is available to download for free from the iOS App Store [Direct Link], and there’s also a premium upgrade that gets rid of ads, includes double rewards bonuses, and offers other incentives for $1.99 per month.