Smart lock manufacturer Kwikset recently announced that the company’s simplistic deadbolt solution, the Kevo Convert, is now available for users to pre-order for $149. Unlike Kwikset’s other systems, including the Kwikset Kevo, the Kevo Convert is an easy-to-install conversion kit that keeps the outward-facing hardware of a standard door lock, while replacing the interior deadbolt. 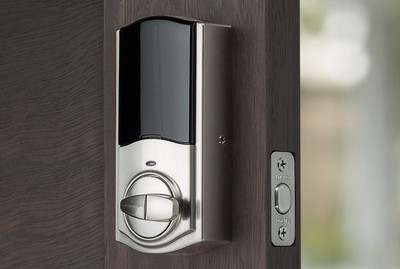 Due to its simpler solution, the Kevo Convert system is cheaper at $149 than Kwikset’s other products, which run for upwards of $230. The conversion kit comes with all of the company’s smartphone-connected abilities, including ways for users to distribute access keys to people trying to get into their home when they aren’t around, and push notifications each time the deadbolt is locked or unlocked.

Other features include an “auto lock” security system that automatically locks the door thirty seconds after it’s been unlocked, “eliminating the need to double-check the front door before bed.” The Kevo Convert system works with any smartphone within Bluetooth range, but users who want the ability to unlock their home and gain remote access to their smart lock when out of that range will have to purchase the $99.99 Kevo Plus kit.

Like other Kwikset products, the Kevo Convert will also be able to integrate with the Nest Learning Thermostat, Ring Video Doorbell, and other smart home connected devices.

Anyone interested can pre-order the Kevo Convert for $149 in Satin Nickel or Venetian Bronze at The Home Depot.