During the iOS 10 beta testing period, Apple added an alert message to notify users who downloaded an older 32-bit app that it could affect system performance, but the warning message does not appear to have made it into the final version of iOS 10 that was released to the public.

Starting in iOS 10.1, Apple is reinstating the warning message, with a more dire alert that will likely steer customers away from apps that have not complied with Apple’s 2015 mandate stating all apps must be 64-bit. As can be seen in the alert below, the message now warns that an app “may slow down your iPhone.” It goes on to say “The developer of this app needs to update it to improve its compatibility.” 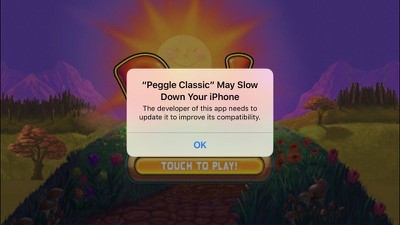 During the iOS 10 beta testing period, the alert instead warned 32-bit apps were “not optimized for iOS 10” and usage “may affect overall system performance.”

Starting in late 2013, Apple began asking developers to submit 64-bit apps for the iPhone 5s, the first iPhone with a 64-bit processor. On February 1, 2015, Apple made 64-bit support mandatory for all new app submissions, and on June 1, 2015, all app updates submitted were required to include 64-bit support.

Apps that are popping up warnings in the iOS 10.1 beta are apps that have not been updated since that time.

Apple has likely reinstated the 32-bit alert message as part of its crackdown on older, outdated apps to clean up the App Store. In early September, Apple notified developers about an upcoming plan to remove apps that have not received compatibility updates, do not comply with current review guidelines, or that no longer function as intended.

Notices started going out on September 7, with developers given a 30 day period to fix problematic apps. After that period, Apple will be removing outdated apps from the App Store.