Apple has quietly introduced a new tvOS app for kids called “iBooks Storytime,” designed to allow children to read along with interactive books on their television sets.

iBooks Storytime features a selection of children’s books from the iBooks Store that feature Read-Along capabilities. Read-Along books are audio-enhanced with different character voices, vivid sound effects, and word-for-word narration that children can follow along with. 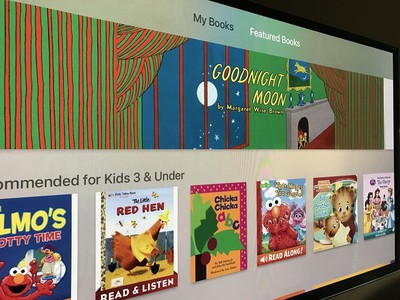 Parents can purchase Read-Aloud books chosen by App Store editors directly from the Apple TV and control the voice narration with the Siri Remote or turn on an automatic reading feature.

Some of the Read-Along titles include Lava, based on the Pixar short film, Green Eggs and Ham, Meet Tracker, The ABCs of Cookies, The Little Red Hen,
and Goodnight Moon. Apple is offering Dora’s Big Buddy Race Read-Along Storybook as a free title for testing the feature.

Read-Along titles are also available on the iPhone and iPad, and previously-purchased selections will show up on the Apple TV. iBooks Storytime is a free download on the Apple TV. [Direct Link]