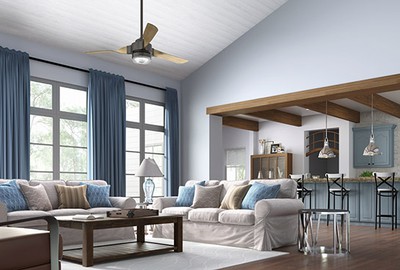 The fan has what Hunter Fan calls a WhisperWind motor, which it says provides powerful air movement with whisper-quiet performance. The motor is reversible, allowing homeowners to change the direction of the fan from downdraft mode during the summer to updraft mode during the winter.

Apache has an integrated LED light, covered with Clear Holophane glass, eliminating the need for bulb replacement. A remote control is included for controlling the fan and light, including dimming the bulbs.

Like its two other HomeKit-enabled fans, the Signal and Symphony, iPhone users can control Apache with voice commands or the Home app on iOS 10.

A three-position mounting system allows for standard, angled, or low ceiling mounting, and a 5-inch downrod is included to ensure proper distance from the ceiling and optimized air movement.

Hunter Fan said the Symphony, a cheaper version of its Signal with white blades, will launch in late November for $329. Signal is available now for $379.