The new private browsing feature apes Incognito mode from the company’s Chrome browser, along with its dark window theme, but adds an extra layer of privacy, too. Like Chrome, search and browse history are not saved when the mode is enabled, but Google app users can also enable Touch ID for the feature, allowing them to re-enter an existing Incognito session after exiting the app. 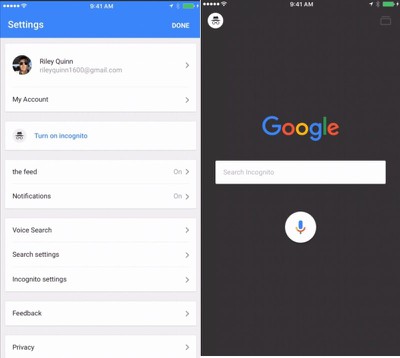 Additionally, the Google app gets inline support for YouTube videos, allowing for instant playback within search results, instead of being switched to another browser window or the YouTube app.

The update also renames Google Now to “the feed”, and brings increased stability for iOS 10 users as well as performance improvements that promise to reduce crashes by half.

The new Incognito mode does not appear to have rolled out to all users yet, but once it does, the mode can be enabled by tapping into the app’s account settings screen and selecting “Turn on incognito”.

A hard press of the Google app icon from the home screen also turns up a 3D Touch option to enter the mode on compatible devices. The Touch ID feature can be configured in Incognito settings.

Google Search can be downloaded from the App Store for free. [Direct Link]