The company regularly showcases Google+ photography on idle Pixel phone screens as well as on TVs and monitors connected to its Chromecast and Google Fiber products. Called Featured Photos, the free screensaver download announced yesterday brings the same eye-catching photography to the Mac. 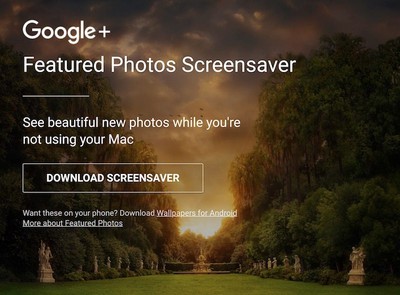 From striking skylines to captivating vistas, talented photographers share beautiful, eye catching work on Google+ every day. To bring these photos to a wider audience, we’ve long showcased a selection of them on TVs and monitors around the world via Google Fiber and millions of Chromecast devices.

Now, we’re pleased to be able to make these beautiful photos by our members even more accessible by bringing them to your computers and [Android] phones.

Photos are selected based on set criteria, so there are no pictures featuring people, text, or watermarks, and all photos are landscape orientation with a minimum 1080p resolution. Each photo is attributed to its owner via a Google+ profile link in the corner of the screen. Users with multiple screen set-ups see a different photo on each screen.