Google Drive was updated today to make it easier for users to transfer their content from iOS devices to Android devices, Google announced. The company also published a new web page on the Android website detailing how it works. 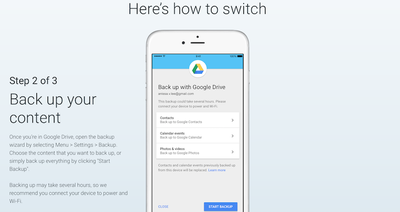 Once a user downloads Google Drive from the App Store, they can navigate toward the backup wizard by going to Menu > Settings > Backup in the app. From there, users can choose to sync select contacts, calendar events and photos or everything. Google recommends that users backup when their iPhone is connected to power and is on Wi-Fi, as backing up can take several hours. Additionally, the Google Drive app must stay open and the screen must stay on.

iPhone users who want to switch to Android must turn off iMessage before they officially switch devices.

Google Drive is available in the App Store for free. [Direct Link]