Google has officially rebranded its “Google Cast” iOS and Android apps to “Google Home,” getting the mobile apps ready for the launch of its hands-free smart home speaker, similarly named Google Home. The new name also comes with a new app icon, new features, and some slight UI tweaks that make “the app easier to use.”

The old Google Cast icon (left) compared with the new Google Home version (right)
The “Home” launchpad in the app now has a “Watch” and “Discover” section that lets you watch videos on any of the Chromecast-enabled apps you already have installed, or discover thousands of new apps available for Chromecast, respectively. Additionally, a floating magnifying glass button enables video search across multiple apps to make it easy to find the videos you want.

Once Google Home launches next week, on November 4, the new app will be the single location for users to control all of their Chromecast and Google Home devices. A “Devices” button in the top right corner will guide users through easily pairing a new product to the app, and after pairing is complete they can adjust its settings, control audio and video playback, and more. 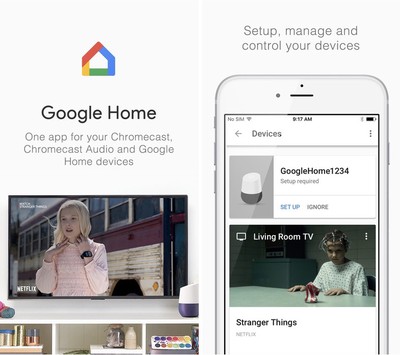 Google Home is available to download for free from the iOS App Store [Direct Link], and users can pre-order the Google Home smart speaker itself for $129.00 from the Google Store, Best Buy, Target, and Walmart.
Tags: Google, Google Home
7 comments