An update to Google’s iOS Gboard app today has introduced 3D Touch into the third-party keyboard, letting users move the cursor by hard pressing and sliding their finger around the keyboard to pinpoint the location they want to land. Gboard’s 3D Touch lacks the free-floating cursor of Apple’s stock keyboard, however, and simply moves left and right throughout a message, without the ability to track upwards and downwards.

The version 1.2.0 update has also added support for Apple’s new iOS 10 emojis, as well as the ability for users to search and share their contacts directly from within the keyboard. Anyone who wants to use the feature must first go to the Gboard app, tap “search settings” and activate “Contacts search,” and then they’ll be able to access their iPhone contact list directly within Gboard in Messages. 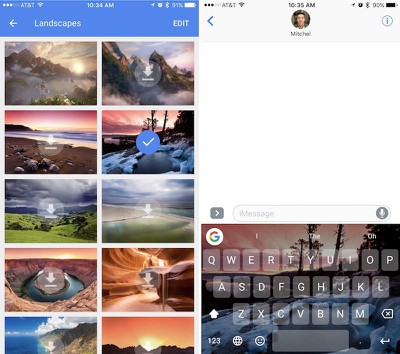 The app has gained new themes as well, including a collection of new “Landscape” images that users can download and add onto Gboard with the tap of a button. When it launched in May, Google touted Gboard’s advantageous ability to perform Google searches directly within the keyboard of Messages. Apple has made a big deal out of similar abilities in Messages with its new Messages App Store in iOS 10, where users can install smaller-scale apps to find movies, make dinner reservations, and place stickers.

Gboard can be downloaded from the iOS App Store for free. [Direct Link]