Delta Airlines recently announced an update to its Fly Delta app that will allow customers to track their luggage by following its journey on a map of the United States. Using RFID tags on a user’s bag, which the airline introduced earlier in the year, the app shows the luggage’s “last known location,” determined by the airport at which it was most recently scanned (via CNN).

When the app is first opened, users see a glimpse of a zoomed out map of the U.S. and they can catch up with a bag’s journey as it travels from one airport to the next, eventually zooming in on its most recent leg of the journey. The step of the bag’s progress at each airport is marked by a pin, with its most current location represented by a suitcase icon. If a user taps any of these pieces of UI, more information about the location and bag’s status will be displayed. 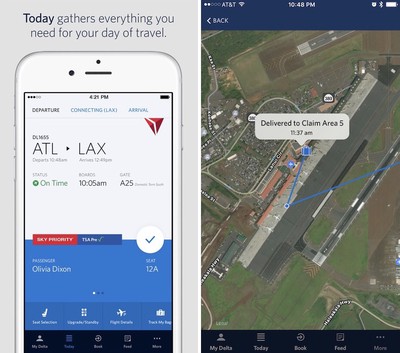 “We’re the first carrier to offer this level of visibility,” said Bill Lentsch, Delta’s Senior Vice President – Airline Operations and Airport Customer Service. “From the moment our customers drop off their bag, we want them to know we’re looking out for it every step of the way and working to take the stress out of flying one innovation at a time.”

“We listen to our customers and know they want a simplified mobile experience that puts the control back in their hands,” said Rhonda Crawford, Vice President – Global Distribution & Digital Strategy. “Fly Delta 4.0 automatically updates when your flight details change, keeping customers informed.”

While the update is available now, Delta said that push notifications won’t be coming until later in the year, but will “offer Delta customers down-to–the-minute updates on their checked baggage.” The 4.0 update also introduces an integration of boarding passes into the “Today” screen, and a tweak to electronic boarding passes now allows them to automatically update with seat, gate, and flight information.

The new bag tracking ability in the Fly Delta app is available at all of Delta’s domestic airports — 84 total in the U.S. — and the airline said international stations will be gaining the feature “in the coming months.” Fly Delta is available to download from the iOS App Store for free. [Direct Link]