Following the launch of “Instagram Stories” in August, Facebook is now preparing to ape Snapchat in its own Messenger app, with a feature called “Messenger Day.” Originally launched to users in Poland, Messenger Day is now expanding and gaining attention with Facebook users in Australia (via Mashable).

With the new feature in the Facebook Messenger iOS and Android apps, Messenger Day lets users post ephemeral updates to their friends, which last 24 hours before expiring, with the ability to doodle and add stickers to posts. Friend updates can be found atop the normal Facebook Messenger home page, and the interface is visually similar to the layout of Instagram Stories with a horizontal row of reverse-chronological updates. 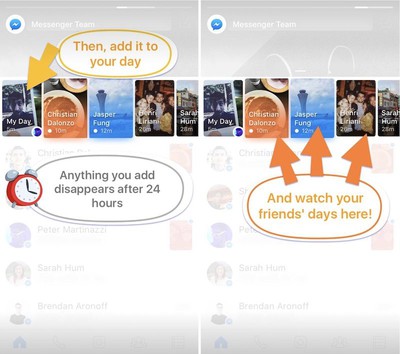 “We know that people come to Messenger to share everyday moments with friends and family. In Poland we are running a small test of new ways for people to share those updates visually,” a Messenger spokesperson told Mashable at the time.

For those who have used Messenger Day, the user interface and features have yet to impress, with one user mentioning that “(The user interface) is really poor, on every level — nothing like Instagram Stories.” Most of the criticism so far seems to be focused on the simple fact that as companies introduce more of the same features into their mobile apps, it leaves users to choose only one service, which is still Snapchat for most, and ignore the rest.

Snapchat’s growing popularity has resulted in other social networks (namely Facebook, which owns Instagram) attempting to combat its 24-hour posts with similar features. Although it’s yet to introduce a time-locked post feature, Twitter has faced troubles recently as more and more younger users opt to check in with Snapchat and Instagram over Twitter.