Facebook has announced that the rollout of cryptographic features for its massively popular Messenger chat service has completed, bringing end-to-end encryption to the largest messaging network in existence.

Back in July, the social network company said it was testing the privacy feature on a limited basis which would eventually be rolled out to all 900 million users of the app. On Tuesday, Facebook told Wired that rollout had finished. 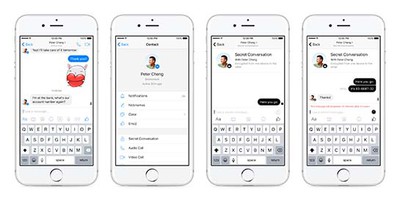 Messenger now implements the same highly regarded cryptographic Signal Protocol that the company’s WhatsApp platform uses to encrypt messages, but the Messenger app needs to be updated and the feature turned on for it to work.

A new “Secret Conversations” option can now be found at the top-right of the app’s New Message screen, provided that users have enabled the option from the Me profile settings screen.

The encryption protocol covers one-to-one text chats and stickers used within threads, but does not currently support the use of videos and GIFs.

Messenger users who update the app will also get to use a new Snapchat-style option that erases messages after a specified duration.

Messenger is free on the App Store [Direct Link] for iPhone, iPad, and Apple Watch.