Elgato today announced the latest product in its line of HomeKit accessories, debuting the Eve Motion wireless motion sensor. The Eve Motion is a small square-shaped accessory that can be put anywhere in your house, indoors or outdoors.

It works in tandem with other HomeKit accessories, allowing you to create scenes that can be set off using automatic triggers. When placed in an entry way, for example, the Eve Motion can automatically turn on the lights and raise the thermostat when it detects that you’ve entered the house. It works with the Eve HomeKit app, Apple’s own Home app, and with other HomeKit apps that support third-party accessories. 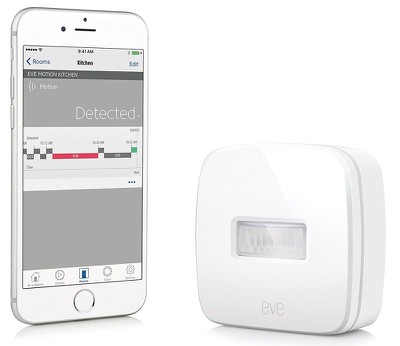 “Motion sensors are an indispensable part of a home automation setup,” said Markus Fest, General Manager of Elgato. ” With no wires attached, Eve Motion is a versatile trigger for a host of unique and creative scenarios.”

Eve Motion connects to a HomeKit setup using Bluetooth and like the rest of Elgato’s products, it does not require a bridge. It runs off of two replaceable AA batteries, so it doesn’t need to be charged, and it has a 120 degree field of view and a range of nine meters with a response time of two seconds. An IPX3 water resistance means it’s resistant to small splashes of water and moisture, but it shouldn’t be outside in a torrential downpour.

The Eve Motion is available from the Elgato website or from Amazon.com for $49.95.