A robbery at an Apple Store in Palo Alto over the weekend has continued a string of Apple Store-related burglaries plaguing the Bay Area over the past few weeks. In Palo Alto, the University Avenue Apple Store was targeted by between eight and ten individuals who drove a rented SUV directly into the store’s floor-to-ceiling glass front, and made away with an unspecified amount of iPhones, iPads, “and other gadgets on display.”

The SUV used to crash into the Apple Store was subsequently disabled due to the purposeful wreck, and the thieves had to escape on foot. Since the event, which occurred early Sunday morning, four suspects have been arrested. 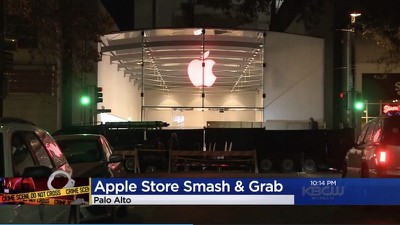 Image via The Mercury News

“This was a pretty brazen act,” said Palo Alto police Sgt. James Reifschneider said, “when somebody breaks their way into a business after hours and uses a vehicle to force their way into a store.”

Elsewhere in and around San Francisco, since October there have been three Apple Store thefts within San Francisco itself, three in Berkeley, three in Burlingame, one in Los Gatos, and one in Corte Madera. These eleven crimes are all believed to be linked, with similar descriptions of the perpetrators connecting each robbery: “a group of young men in their late teens or early 20s wearing hooded sweatshirts.”

The hooded thieves were said to rush into each Apple Store and “in about 45 seconds” stole upwards of $20,000 worth of iPhones and iPads tethered to their display tables. The Apple Store on Chestnut Street in San Francisco was hit on Black Friday and again the following Tuesday, at nearly the same time the Apple Store on Stockton Street was robbed. The frequency and “brazenness” of each robbery has lead to increased security in front of most Apple Stores in each area.

“It just keeps happening,” said Burlingame resident Angelina Bruno. “It’s really strange to feel that unsafe in a town that used to feel so safe.”

The Palo Alto theft is not connected with these other crimes, according to local police. Local news channel KTVU reached out to Apple for a comment, but Apple spokesperson Nick Leahy said “we don’t comment on matters of security.”

It should be mentioned that in any Apple Store robbery, all of the devices that make it out of the store’s Wi-Fi range become useless thanks to Apple’s built-in security measure that bricks each smartphone and tablet.