Home » How To » Apple’s ‘Notify’ Feature for the Release of Super Mario Run Was Far Too Late for Users – mytutorials.xyz
Advertisement

Apple’s ‘Notify’ Feature for the Release of Super Mario Run Was Far Too Late for Users – mytutorials.xyz

Shortly after Apple first revealed that Nintendo was bringing Super Mario Run to the iPhone and iPad, many users discovered that Cupertino was also using the game’s highly anticipated release as a test run for a new “Notify” system in the App Store.

Upon searching for the title on their devices before it was available, users were given the option of tapping an orange “Notify” button where the Get button or price usually appears. 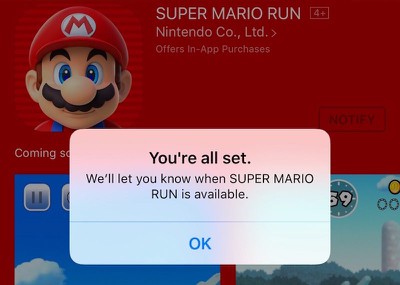 Undoubtedly many users tapped or clicked the button thinking they would be first to play Nintendo’s debut title on iOS. But the delay between the game’s appearance in the App Store and the actual delivery of notification prompts has left many users skeptical of the feature.

Scumbag Super Mario: Asks you a million times to be notified for the app release. Doesn’t notify you when app releases.#SuperMarioRun — Jared Mecham (@jaredmecham) December 15, 2016

For many, the notification came the day after the game had been officially released. Large numbers of people received it long after they had downloaded and purchased the full game. Others are apparently yet to receive the prompt they signed up to receive.

It’s possible that the sheer volume of users visiting the App Store in excitement for Super Mario Run caused a system-wide lag that prevented the notifications from being pushed to end-users’ devices. If so, some may wonder why Apple chose to test the Notify service on such a hugely anticipated title in the first place.

Conversely, Apple may have intentionally staggered the notifications to ease the load on its systems as gamers raced to download the app. In that case, the feature could prove a smart move on Apple’s part for when big-name game publishers stoke up excitement for upcoming titles in the future.