Glide recently announced a new Apple Watch band that includes both a 2MP front-facing camera, as well as an 8MP outward-facing one, with the ability to capture crisp images and HD videos “in a tap.” Called the “CMRA,” users simply have to tap a button built into the band to snap a photo or long-press to begin recording a video, and on one charge the CMRA can take “hundreds of photos,” or about 30 minutes of video (via Re/code).

The sole button housed on the band also switches it between the two cameras with a double-tap. Any pictures or videos taken with the band are seamlessly integrated with Apple’s stock Photos app, so it’s easy to store, edit, and share moments captured on the CMRA. Glide says that the cameras on its band include tilt-balancing, lens correction, noise reduction, and pixel optimization features to provide enhanced shots on the fly. In terms of storage, the CMRA has 8GB of onboard flash memory.

The band’s video conferencing feature uses Glide’s iPhone and Apple Watch chat app to let users talk in real time, or send recorded video messages to one another. When the Apple Watch app launched last year, it set itself up as a companion to the iPhone app, notifying users of live Glides, missed messages, and let users watch videos right on their wrists. With CMRA, now users can begin recording those videos without needing to grab an iPhone.


For charging, pre-orders of the device will come with a custom dual-charging dock that charges both the Apple Watch and CMRA together, and the dock itself includes a battery pack so it can recharge the two devices twice during travel. Speaking with Re/code, Glide CEO Ari Roisman explained that the company is offering up pre-orders months in advance (CMRA is predicted to launch in Spring 2017) to test the waters and see how much interest the product gathers online. 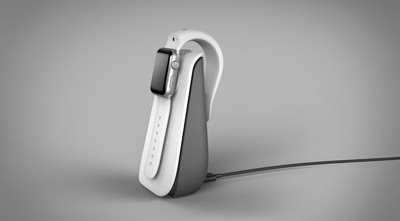 As for why it is taking orders so early, Roisman offers up the standard answer for small companies looking to do hardware: It needs to know how many to build, and the best way to do that is to sell them publicly before the first units roll off the manufacturing lines.

“The camera is only valuable when it is out and ready to take a photo or video,” says Glide CEO Ari Roisman. “Our phones live in our pockets.”