Twitter today announced the results of its first ever #Awards initiative, naming Apple as the top customer service provider on the social networking platform.

Apple was awarded with the “Gold” #Customer award for the @AppleSupport Twitter account, which Apple uses to quickly respond to customer service requests. According to Twitter, the @AppleSupport account ranks #1 among support accounts for average engagements and average engagements for followers, racking up 150,000 likes and retweets since its launch. 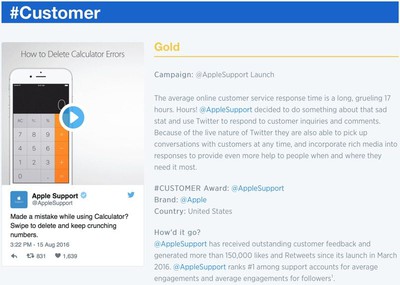 The average online customer service response time is a long, grueling 17 hours. Hours! @AppleSupport decided to do something about that sad stat and use Twitter to respond to customer inquiries and comments. Because of the live nature of Twitter they are also able to pick up conversations with customers at any time, and incorporate rich media into responses to provide even more help to people when and where they need it most.

Apple interacts directly with customers through the Apple Support Twitter account and provides quick solutions to problems, often responding to requests in a matter of minutes during the hours of 5:00 a.m. to 8:00 p.m. Pacific Time.

Since its March launch, Apple Support has gained more than 524,000 followers and has shared dozens of useful product tips that often garner hundreds of likes and retweets.