Apple CEO Tim Cook will participate in a Q&A session with U.S. senator Orrin Hatch this Friday, as part of the senator’s Utah Tech Tour (via AppleInsider).

The event is being held to highlight the state’s technology community, and the Apple chief is scheduled to give a short address before taking questions from Hatch and members of the public. An online form has also been set up for submitting questions for possible inclusion in the Q&A. 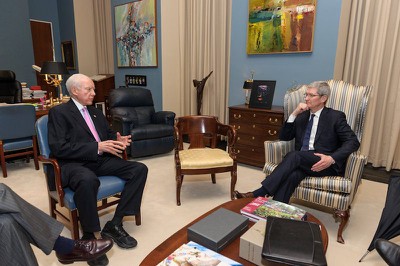 It’s not clear what topics will be up for discussion during the event, although Apple’s run-in with the government over encryption and privacy issues following the San Bernardino shooting case is likely to be on the agenda.

Senator Hatch serves as the Chairman of the Senate Republican High-Tech Task Force, and in April he invited members of the Senate to a special Q&A session with one of the lawyers Apple hired to head its legal team during its dispute with the FBI.

The Utah Tech Tour takes place at the Grand America in Salt Lake City, from 5.30pm to 7pm MDT on Friday, September 30. The event is open to the public. Tickets of limited availability can be ordered online via the Utah Tech Tour website.