Home » How To » Apple Seeds Fourth Beta of tvOS 10.1 to Developers – mytutorials.xyz
Advertisement

Apple today seeded the fourth beta of an upcoming tvOS 10.1 update to developers for testing purposes, two weeks after seeding the third tvOS 10.1 beta and more than a month after launching tvOS 10.

Designed for the fourth-generation Apple TV, tvOS 10.1 beta 4 can be obtained by connecting the Apple TV to a computer with a USB-C to USB-A cable, downloading and installing the software from a registered developer account via iTunes or Apple Configurator. Once a beta profile has been installed on the device through iTunes, new beta updates will be available over the air. 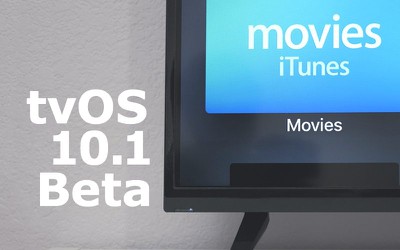 Many Apple TV owners have been eagerly awaiting the arrival of a promised Single Sign-On feature that will allow Apple TV users to sign in once with their cable credentials to access all available live cable content, and the feature was introduced in the first tvOS 10.1 beta. Single Sign-On is currently available for DirecTV, Dish, GVTC Communications, Hotwire, and Sling TV.

Shortly after the release of the third beta, Apple unlocked the new “TV” app, which is designed to make it easier for users to discover new content across the dozens of television and movie apps that are available.

It serves as a sort of Apple-designed television guide, giving customers a way to find and watch TV and movies across multiple devices. It features a dedicated store, recommended content, and cross-device syncing.