Apple today released a new software update for the Apple Watch, upgrading watchOS 3 to watchOS 3.1. The new watchOS 3.1 update comes more than one month after watchOS 3 was first provided to the public, marking the first update to the new operating system. watchOS 3.1 has been in testing since September 21, with Apple having seeded three betas before launch.

watchOS 3.1 can be downloaded through the dedicated Apple Watch app on the iPhone by going to General -> Software Update. To install the update, the Apple Watch must have 50 percent battery, it must be placed on the charger, and it must be in range of the iPhone. An iPhone running iOS 10 or later is required to download the new software, but it is available for all Apple Watch models. 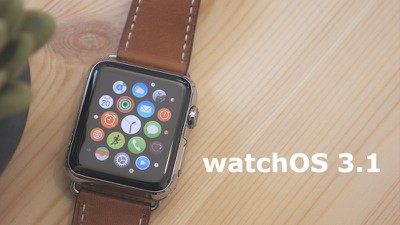 During the beta testing period, no major outward-facing changes or feature tweaks were discovered, so watchOS 3.1 focuses mainly on performance improvements and bug fixes to address issues that have popped up since the release of watchOS 3. The release notes list several bug fixes and improvements:

watchOS 3 is a significant update that brings a new interface to the Apple Watch, with a dedicated app dock, instant launch apps, and new watch faces. There are new Activity sharing features, a “Breathe” app guides users through deep breathing sessions to cut down on stress, and an SOS feature can automatically call emergency services. For more details on watchOS 3, make sure to check out our watchOS 3 roundup.