Apple today released a new update for tvOS, the operating system designed to run on the fourth-generation Apple TV. tvOS 10.0.1 comes one and a half months after the release of tvOS 10 and marks the first minor update to the new operating system. tvOS 10.0.1 has been in testing since September 21, with Apple having seeded four betas to developers before releasing it to the public.

The new tvOS 10.0.1 update can be downloaded over the air through the Settings app on the Apple TV by going to System –> Software Update. Those who have automatic software updates turned on will be upgraded to the new operating system automatically. 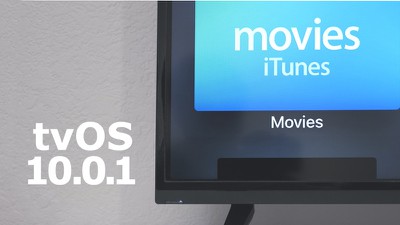 As a minor 10.x.x update, tvOS 10.0.1 focuses on performance improvements and bug fixes to address issues discovered since the release of tvOS 10. During the beta testing process, no major outward-facing changes or obvious bug fixes were discovered.

The tvOS 10.0.1 update does not include support for single sign-on, a feature that will allow Apple TV users to sign in once with their cable credentials to access all live cable content included in a cable subscription. Apple has said single sign-on will be introduced in a future update.

tvOS 10 brings improved search, expanded Siri capabilities, a new dark mode, a Continuity option for using the iPhone for text input, automatic download of universal apps, easy access to live TV, and more. For full details on what’s new in tvOS 10, make sure to check out our tvOS 10 roundup.