Apple will report its fiscal fourth quarter earnings results later today, and both the company and analysts project a year-over-year decline in iPhone sales and overall revenue for a third consecutive quarter. Apple will then have posted its first full-year revenue decline since 2001, with the decline expected to continue through the holiday quarter. Wall Street projects Apple will return to growth in 2017.

Apple previously forecasted September quarter revenue of between $45.5 billion and $47.5 billion, which would be up to 12 percent lower than the $51.5 billion in revenue it posted in the year-ago quarter. The consensus among analysts is around $47 billion in revenue, at the higher end of Apple’s guidance, according to earnings estimates aggregated by Philip Elmer-DeWitt and Jim Edwards.

Apple analyst Neil Cybart of Above Avalon has forecasted declining sales across Apple’s entire core product lineup, including 43.7 million iPhones, 9.1 million iPads, 5 million Macs, and 1.9 million Apple Watch units. One continued bright spot for Apple is expected to be its services category, projected to rise 20% to $6.1 billion on the strength of the App Store, Apple Music, iCloud, and AppleCare. 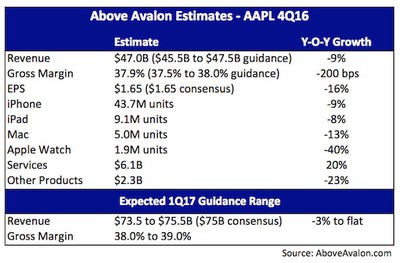 Apple analyst Brian White of Drexel Hamilton continues to recommend AAPL stock to investors, noting that shares remain undervalued. His price targets remains $185, or nearly 57% higher than Apple’s $117.86 price at the time this article was published. White believes Apple’s “sales, profit and iPhone cycle have bottomed” and that iPhone 8 sales can drive another year of growth.

Apple will report its fiscal fourth quarter earnings at 1:30 p.m. Pacific Time, followed by a conference call to discuss the results at 2:00 p.m. Pacific Time. MacRumors will be providing full coverage of Apple’s earnings results alongside a live transcript of the call. Check back for the latest updates.