Apple today was granted a patent that essentially updates an older wearable sports and health tracking device invention with features similar to those found in the company’s new AirPods wireless headphones.

The U.S. Patent and Trademark Office published an Apple patent on Tuesday with the title “Sports monitoring system for headphones, earbuds and/or headsets“, which AppleInsider notes is nearly identical to a patent of the same name granted in 2014. However, the new document adds some new details hinting that Apple may be planning on integrating the technology into a forthcoming version of the company’s AirPods. 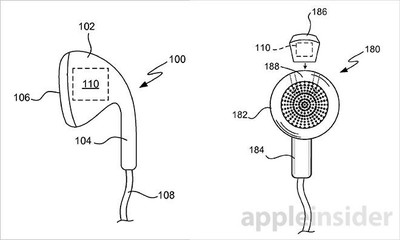 The patent describes an earbud-based fitness monitoring system which integrates an advanced biometric sensor that can detect physiological metrics including temperature, heart rate, perspiration levels and more, through skin contact and via built-in motion sensors.

The updated document does away with references to a head gesture-controlled user interface and replaces them with details of a UI that users interact with via voice and touch. The newer invention allows users to touch areas of the headphones to trigger controls such as changing music track or invoking Siri. Alternatively, users can speak commands through a microphone, which are then processed by the headset or sent to a host device such as an iPhone. 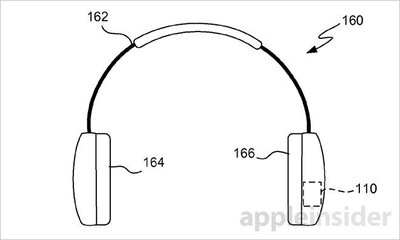 The changes bear clear similarities to Apple’s recently delayed AirPods, which include embedded infrared and motion sensors for controlling various system functions. AirPods automatically detect when they are removed from the ear and can power off independently. The AirPods’ tap controls also enable wearers to invoke Siri which can then be used to control music playback, volume, and other options.

With Apple’s first-generation AirPods already being delayed suggesting technical issues, it’s unlikely we’ll be seeing a biometric sensor-equipped version of the earbuds soon, but the patent suggests Apple still has long-term designs on in-ear health and activity tracking, possibly being readied for a future model.

Apple says it needs “a little more time” before its AirPods are ready for customers, but a recent report indicated they could enter production in December possibly in time for availability going into the holiday season.