Apple is looking into integrating its Siri virtual assistant into the company’s Messages platform, according to a patent published today, enabling the AI to provide directions, retrieve movie times, and assist with peer-to-peer payments, among other potential uses.

Picked up by AppleInsider, Apple’s application for a “Virtual assistant in a communication session” appeared on the U.S. Patent and Trademark Office’s website on Thursday, and details a system in which iMessage users can invoke Siri from within chat threads to get answers to relevant queries, complete scheduling tasks, and more. 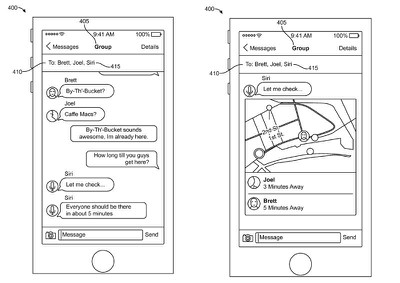 One scenario describes an instance in which users chatting amongst themselves bring Siri into the conversation simply by including it in the group thread. Using semantic analysis, the AI detects when it may be of help to complete a task and pitches in accordingly – such as finding a place to eat nearby, and telling the user how long it will take for their friends to arrive.

Although Siri’s responses don’t appear to other users, the assistant is able to parse their messages in order to work out whether it can help with a task. For instance, in another example, the user asks “Siri, help us schedule a meeting,” in a group chat thread and the AI cross-checks open calendar dates for the present users to suggest a potential meeting date and time. Participants can then vote for a preferred time and place, after which Siri schedules the meeting in everyone’s calendar.

In another example, chat members are notified that a user is utilizing Siri and are asked if they would like to do the same, and participants can approve or deny AI access to personal data about them during the chat session. Meanwhile other scenarios depict AI interactions during peer-to-peer payments, for example by determining which financial apps are being used by each chat member.

Some of the implementations in the patent bear similarities to actions already offered by Google Assistant in Google’s Allo app, and by chat bots in Facebook Messenger, while third-party apps like PayPal and Uber currently offer Siri functionality following Apple’s release of the Siri SDK to developers. Whether or not Apple decides to integrate Siri in Messages in a future update, the AI is likely to require extensive development before users consider inviting Siri to conversations and extending access to their data.