Amazon today launched a new Prime Photos feature called “Family Vault”, which extends the unlimited photo storage that Amazon Prime subscribers get to their friends and family members (via TechCrunch).

For those unfamiliar with Amazon Prime, a $99 per year subscription includes free two-day shipping, unlimited streaming of movies, TV shows and music, and unlimited photo storage, among other benefits. With the arrival of Family Vault, Prime subscribers can now invite up to five family members or friends to join their online account, where they can combine photos and each get another 5GB of storage for uploading videos and other files.

The thinking behind Family Vault is to allow close friends and families to see each other’s photos and videos in a single location, and be able to access them on their own devices, at no cost to those added by the Prime account holder. 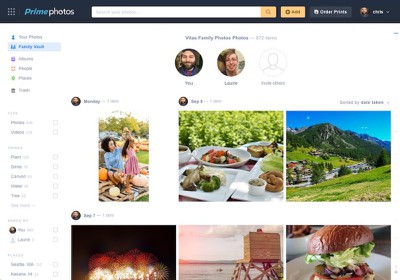 The Family Plan announcement also ushers in some new search technology for Prime Photos users, including keyword-related searches for photos with a specific theme or subject (e.g. cat, wedding, beach, and so on) and a face-finding feature called “People”.

Further details of all of the company’s newly announced features can be found on Amazon’s Photos minisite or through the Amazon Photos mobile app.