Home » How To » Alto’s Adventure Among the First iOS Games to Support Haptic Feedback – mytutorials.xyz
Advertisement

Snowman has announced that Alto’s Adventure has been updated with in-game haptic feedback on iPhone 7 and iPhone 7 Plus, making it one of the first-ever iOS games to support the new Taptic Engine. 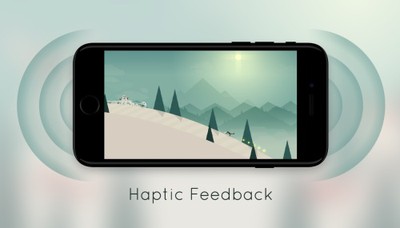 Now, when playing the game, users will experience subtle vibrations when completing in-game tasks, such as collecting a wayward llama, sliding over an ice boost, or snapping a shot in Photo Mode. Even small interactions such as reaching minimum or maximum zoom are now accompanied by haptic feedback.

Thanks to the expanded Taptic Engine, we’ve been able to pinpoint exciting moments in a run and tie them to more precise vibrational feedback. Now, you’ll feel a nice jolt of satisfaction upon collecting a wayward llama or sliding over an ice boost. The golden burst of a super coin or powdery landing of a huge combo will hopefully be a little more thrilling.

We’ve even tried to give some consideration to calmer moments: reaching minimum & maximum zoom or snapping the perfect shot in Photo Mode will vibrate like a real camera, immersing you in the joys of being your own mountain photographer. The list goes on, but rather than spoil it all, we’re excited for players to stumble onto each new interaction and find their favourite ones.

The functionality is made possible by an expanded Taptic Engine in Apple’s latest iPhones. Whereas the Taptic Engine on iPhone 6s was limited to 3D Touch and very few other system interactions, haptic feedback now has much wider iOS support, and developers are able to put the Taptic Engine to work in third-party apps.

Alto’s Adventure is a beautiful endless runner in which you control a snowboarder through procedurally generated mountains and valleys, amid thunderstorms, blizzards, fog, rainbows, and shooting stars. The game features physics-based gameplay, along with fully dynamic lighting and weather effects.


Alto’s Adventure is $3.99 on the App Store [Direct Link] for iPhone and iPad. Version 1.4.1 is available now as a free update for existing users.
Tag: Taptic Engine
66 comments